Making music on a guitar is a profound experience that is greater than just strumming strings. The way the guitar makes you feel, both emotionally and physically, will make a huge difference in what comes out of it. When you pick it up, does it come with no or little effort? When you strum a chord, does it resonate so you feel it in your hands and gut? After you have played it for as long as you need to, are you still relaxed? At Strandberg Guitars, we think that answering yes to these questions will make you sound better…

One of the most important aspects of an ergonomic guitar is that it is lightweight and rests easily on your shoulder when you play it standing up. Unless it balances well, the neck will want to dive against the floor, and it is impossible to play it relaxed. The first step to solving this is to remove the weight of the tuning machines at the headstock. A headless guitar will by definition have less weight at the end of the neck, and it is possible to make a light body and still maintain balance. We created our own hardware out of aircraft grade aluminum to maximize the potential.

When .strandberg* was “born” in 2007, it wasn’t out of nothing. I (Ola Strandberg) had built guitars since the early 80’s, although not actively since the mid 90’s. When I, as a young lad, played in a variety of bands growing up, I preferred having a tremolo. And when I got my hands on a used Hohner Steinberger copy and reused the tremolo for my own “Strandberger” guitar, this became my absolute favorite guitar. The tremolo could be locked in place, providing the best of both worlds, with either fixed bridge or floating tremolo. And the guitar itself was smaller than conventional guitars with a headstock and seemed to just make sense.

So, when it was time to get started again in 2007, making a headless guitar was one of the first parameters going in. As I started researching the market for hardware for headless guitars, it turned out that there was practically nothing around. The best resource I could find for information was a blog called buildingtheergonomicguitar.com, and it was here that the idea of creating an ergonomic guitar was hatched. I designed a concept called the “Ergonomic Guitar System” or EGS, that consisted of headless hardware, replacement necks, and complete guitars. Just doing the hardware kept me occupied for several years, so meanwhile, the guitar ideas kept evolving and the replacement neck idea was scrapped.

We believe that the benefits outweigh the drawbacks greatly of course, but only you, the player, can decide what is best for you.
Our hardware, which is the foundation of the entire EGS guitar concept, is now in its 5th generation. To the right, you can see some of the evolution.

An extended range guitar, or ERG, simply has a greater range of playable tones than a conventional guitar. Most often, this means extra strings: 7-string and 8-string guitars are becoming mainstream, but more and more people are also starting to play 9-string guitars. To successfully create an extended range guitar that sounds great and plays well, one needs to think of it as a new instrument with a different range of frequencies that need to resonate through the guitar and that also need to be picked up by the electronics. We chamber our bodies and laminate our necks with carbon fiber in a process we developed ourselves and work with the best pickup manufacturers to maximize the potential.

An “Extended Range Guitar” can mean many things. In popular terms, it often refers to a guitar that has more than 6 strings but can also mean a 6-string guitar that might have a longer scale length and a lower tuning as a result.

The .strandberg* brand has its strongest foundation in extended range guitars – this is where we originally gained popularity, through first the Made to Measure guitars, then the Boden and Boden OS series.

From a design perspective, there are some things one has to keep in mind in an extended range guitar, such as:

Above, you can see Animals as Leaders frontman Tosin Abasi playing Made to Measure guitar #8 and Javier Reyes with #63. These are an excellent examples of extended range guitars, featuring our very latest technology, which is a modular nut. This guitar not only has an extended range with regards to the number of strings, but also two additional frets beyond the nut, to provide even more range. Javier and Tosin tune the 8th string to a C# and the remaining strings AEADGBE.

As already stated, one must think of an extended range guitar as a different instrument than a conventional guitar. Generally speaking, a heavier gauge string has a better tone and intonation the longer it is. A string at higher tension sounds better than a loosely tensioned one. But at the same time, one wants to be able to bend notes and play with ease. The solution is to create a guitar with different scale lengths for each string. The term “fanned fret” is a trademark by inventor Ralph Novak that refers to the fact that the frets are laid out in a fanned shape to support the different scale lengths. In addition to better tone, we improve the ergonomics and playability by an optimized fanning of the frets.

As we all know, lower notes are produced by heavier gauge strings. And, generally speaking, the tone and intonation accuracy is improved the longer a string is. So, when attempting to build an Extended Range Guitar that goes lower than a conventional guitar, a longer scale length has real tonal benefit.

But when drop tuning the E string to D or even C, it can become quite loose and not ring as well. And when adding a 7th or even 8th string tuned to B or A and F# or E respectively, it is almost impossible to get a good tone, intonation and string tension on a 25.5″ scale length. The solution is to increase the scale length – often to 27″, but this comes at the expense of a high E with even a light gauge of .009″ becoming quite stiff and hard to bend.

The solution is to create a multi-scale instrument where each string has its own scale length. For example, our Boden 8-string has a scale ranging from 28″ for the 8th string and 26.5″ for the 1st. Using a .084″ gauge string, you can get excellent tone even when drop-tuning the 8th string to E and with even a .010″ 1st string it is possible to bend with reasonable comfort. To accomplish this, the frets are laid out in a fanned manner. Luthier Ralph Novak filed a patent for this in 1989 (now expired) but still has the rights of the trademarked term “Fanned-Fret”. The original design literature describes many tonal benefits from a multi-scale design but we will focus on ergonomics and the tonal aspects listed above.

So, why not 28″ – 25.5″? This would create better comfort for bending the higher notes. The answer lies in ergonomics. The 28″ – 26.5″ range provides great tone and, at the same time, excellent ergonomics. When laying out the fan of the frets, there is a neutral point somewhere on the scale. When we at Strandberg Guitars work with a client, we will determine which scale lengths work best for the tone that is sought but also where the neutral point ends up based on the size and playing style of the player. The original Boden 8 was built for Tosin Abasi (Animals as Leaders) and we determined that the neutral point was best placed near the 7th fret. This way, the layout of the frets accommodate the “windshield wiper type” motion that the arm makes when moving up and down the neck. Any other relationship between the scale lengths or any other neutral point would impact the comfort of playing. 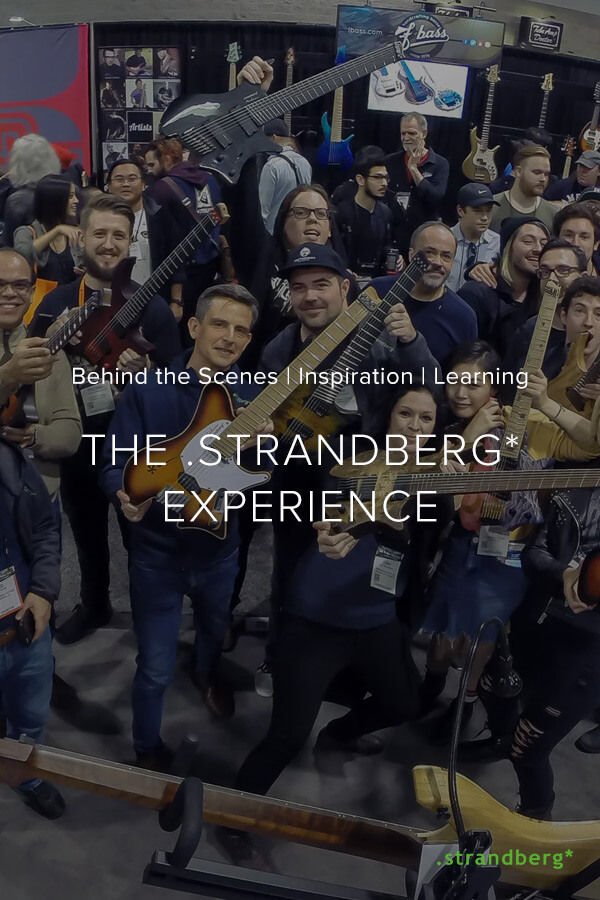 We are thrilled to catch up with award-winning Swedish jazz guitarist Loke Risberg to talk about his experience playing .strandberg*.

And showcases his versatile playing!

"Ever since I tried a Strandberg for the first tim

Lean, mean, green machine from our friends and cer