Hey, I’m Leo. You probably don’t know me. But if you do, it’s because you either saw a video of Ola “singing” All Star by Smash Mouth or a video of some swede playing a Strandberg with a bunch of gnomes on it in a park. I did both of those. The former which resulted in me winning a Strandberg Classic (which I still almost can’t believe actually happened). Apparently this has given me some trust from Ola when it comes to meme-makery, and I was asked to write this piece.

Welcome to How To Meme 101: Your guide to making Spark content
In a few simple steps you’ll be memeing in no time, getting yourself some flint, some self-esteem boosting “haha reacts” from your fellow Spark people, and finally your oh so sweet Strandberg guitar.

I’ll be using my Ola / All Star video as an example for all of these steps.

Step 1. Know your expertise and limitations
First of all. Know what your capable of, and what you’re good at. I have background within video editing, so I knew I wanted and should do something heavily based around that. I also wanted to do something at least vaguely musical, but since the last similar piece I did was mostly focused on its musical aspect (The Gnomeberg video), I wanted the focus to be more upon video editing this time around. I trust my video and audio editing skills more than that of my, say, guitar playing or music writing skills, so I had my medium set.
Within this step its also a good idea to note how much time you have. I was lucky enough that I had the 2 weeks off when this Spark theme was up, so I was able to put in the 30 hours the video required from me.

Step 2. Know your audience
Who are you making the video for? Whose ears and/or eyes do you want to please with your new creation? I knew my audience was a bunch of music nerds, so musicality was definitely on the table. I also knew that Ola Strandberg was known to everyone who was gonna watch this video, so making something starring him would make sense, and would be relatable to as many as possible.
By knowing your audience you should also know what type of content they are used to see. A lot of Spark content is quite “serious” (at least more serious than jump cuts of Ola singing All Star), so to break the mold I wanted to make something more comical.

Step 3. The idea
The core of your idea can come from anywhere. Inspiration is hard to chase down. But when making Spark content you’re given a theme, and it’s a great start. The Ola / All Star video was based on the theme “What if x was y”, so I took the other concepts I knew I wanted to incorporate and added them into my equation: So that x = Ola Strandberg and y = music. And voila! I realized I needed to make Ola sing some song. 2 songs immediately came to mind: All Star by Smash Mouth (obviously) and Africa by Toto. Both because of their meme history and how famous they are. I figured All Star would fit the bill better due to its faster vocals, making the video cuts quicker, and the video more fun to watch.
As soon as you get a sweet idea you should figure out what is needed to make it work, and compare it to your expertise, limitations, knowledge and time.
Some of the things I needed to make my video was: LOTS of footage of Ola talking (which was easily available on YouTube), an instrumental version of All Star (lots of covers and different versions were available online), some MIDI to tune Ola’s voice to (I knew I could write it myself, and later realized this too was available online), the lyrics for All Star (the internet provides once again), video editing software (I used Sony Vegas 14), and a hell of a lot of time (Reaping the benefits of unemployment).
If you realize you don’t have the knowledge or the tools to make it work, consider altering the idea or getting some people to collaborate with. In my case having someone else help me look through all of the Ola footage I got would have made it all a lot less time consuming. One person could have found more relevant footage while the other was editing the old footage, etc.

Step 4. Get to work
Follow the plan, and do it. Every idea has a different order in which things need doing. And in my case I was able to do pretty much every stage in the video simultanesouly. But I started out by downloading a few hours worth of footage of Ola talking. I then put the original All Star song into my video editing software and looked up the lyrics to the song. I filtered the lyrics so that I just got one instance of every word (Example: in the song they sing “somebody” several times, but in my text document there was just one instance of that word). Then I looked through my footage until I either found a spot where Ola says a word from the song (or half of it, or just a syllable, etc). I then took that footage and put it in my video editing software so that it covered the spots where that word/sound is sung. Then I deleted that word from my text document, and continued on looking through the footage for a new word.

A lot of the words just weren’t there, so I had to play Frankenstein and cut other words into pieces to form the word I needed. And sometimes I just went plain lazy and took something that was “close enough” (Such as when the sentence “My world’s on fire, how about yours?” was sung with the word ‘file’ instead of ‘fire’). Every idea or project will encounter issues. It’s up to you to improvise, adapt and overcome.
Once all the footage needed was roughly on place I fine tuned the timing for each word. Once the timing was nailed I was able to export the audio from all of that Ola footage, put it into my audio editing software (Reaper) and tune it using the MIDI I had found online.
Lastly I replaced the old audio in the video editing software with this new tuned one, and replaced the backing track with an instrumental one. (I did end of using a vocal stem as background vocals just because I thought it sounded better)

I might sound all mighty and confident here, but really, it’s a gamble, and it should be. You can never be 100% certain your content is gonna get the super positive reaction you’re looking for. In my case, I had absolutely no idea how my video was gonna be received. I figured people were either not gonna find it funny, or at best give it a slight laught but then ask “Why would he put this much effort into THIS?”. And I had never met our Mr. Strandberg, so I didn’t know if he was gonna find it funny at all; Maybe he was gonna get angry at me even.
Of course you must believe in the content you’re creating, or at least think it’s fun making it. Otherwise you probably won’t even bother creating it.
Higher risks usually come with higher rewards.

In the end my project turned out way better than I expected. All my hours spent on carefully listening to how Ola pronounces each and every word well worth it. 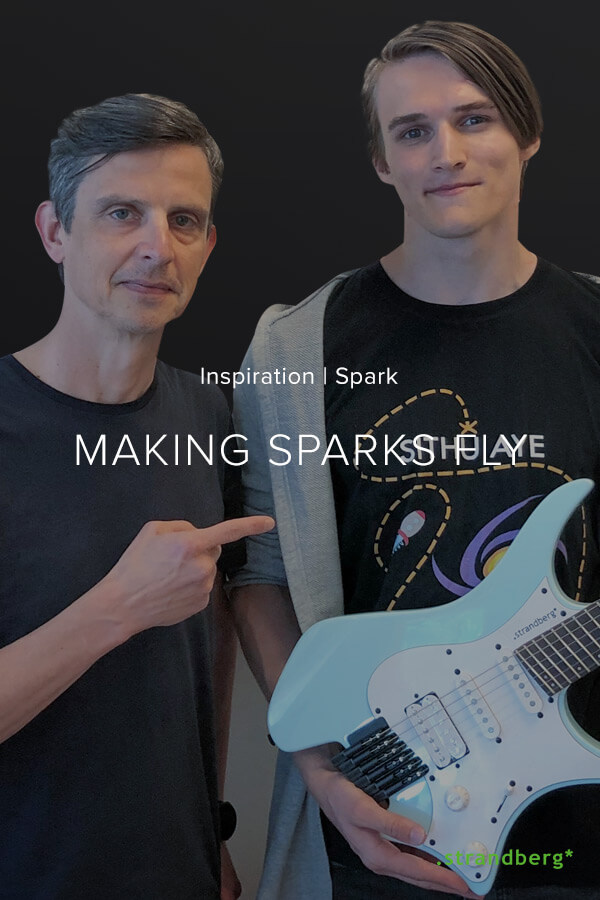 - Read more
Artist Profile | How to

Gorgeous shots of the Boden Standard 6 in Flame Bl

Killer tones from @owane.p on the Boden Classic! R

The one & only sonic Swiss Army Knife that is the